US Weekly published a story on Wednesday that turned out to be false. In fact, the “source” for their article was a parody website called “SuperTuesdayNews.com.” US Weekly has subsequently scrubbed the story from their site, but not before another site by the name of “Gossip Cop” captured a screen-shot of the shoddy journalism. 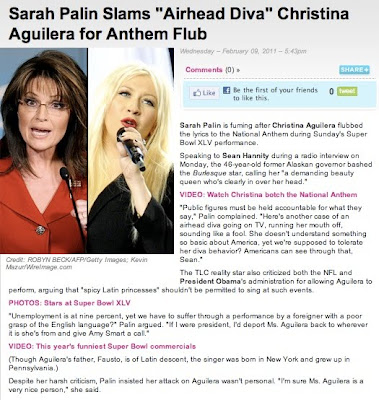 This is really bad.

Us Weekly has published what it claims are comments made by Sarah Palin, in which the former vice presidential candidate blasts Christina Aguilera’s performance of the national anthem at Super Bowl XLV.

Except the over-the-top “quotes,” which Us Weekly attributes to a Monday radio interview with Sean Hannity, were actually written for a satire website.

They come from a satire piece.

Only Us Weekly posted the “Palin” comments as real.

Therefore, according to the outlet, Palin calls Aguilera a “demanding beauty queen who’s clearly in over her head.”

The fake “Palin” also talks about wanting to “deport” Aguilera, because “spicy Latin princesses” shouldn’t be allowed to sing at the Super Bowl.

“Unemployment is at nine percent, yet we have to suffer through a performance by a foreigner with a poor grasp of the English language,” the fake “Palin” supposedly tells “Hannity” in the phony interview.

It boggles the mind that a major outlet could read these obviously satirical, fake quotes and treat them as the real deal.

US Weekly proves once again why the public cannot trust everything they read from the media. Maybe they should consider setting some new standards for their writers in the future. At the very least, to avoid embarrassing situations like this one.