America Has More Recoverable Fossil Fuel Resources Than Any Other Country

Yes, despite the conventional wisdom being peddled by the inept Obama Administration, you read the headline correctly. Via Peter C. Glover at the Energy Tribune:

In case anyone missed it, let me repeat something that is of a magnitude of 10 on the scale of news-quakes for Joe Public USA: America’s combined energy resources are, according to a new report from the Congressional Research Service (CSR), the largest on earth. They eclipse Saudi Arabia (3rd), China (4th) and Canada (6th) combined – and that’s without including America’s shale oil deposits and, in the future, the potentially astronomic impact of methane hydrates.

Glover provides this helpful chart to illustrate his point: 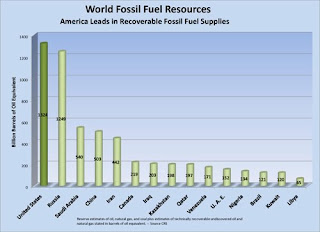 Glover first debunks the liberal myth that America has no oil:

While the US is often depicted as having only a tiny minority of the world’s oil reserves at around 28 billion barrels (based on the somewhat misleading figure of ‘proven reserves’) according to the CRS in reality it has around 163 billion barrels. As Inhofe’s EPW press release comments, “That’s enough oil to maintain America’s current rates of production and replace imports from the Persian Gulf for more than 50 years”.

Of course to utilize our vast oil reserves, we have to actually drill for it.  But alas, our president is determined to lock up those resources for the foreseeable future, a point Governor made in a recent Facebook Note.  If anything, Obama prefers that America increase its reliance on foreign oil.  Glover continues his piece discussing America’s enormous coal reserves:

Next up, there’s coal. The CRS report reveals America’s reserves of coal are unsurpassed, accounting for over 28 percent of the world’s coal. Much of it is high quality too. The CRS estimates US recoverable coal reserves at around 262 billion tons (not including further massive, difficult to access, Alaskan reserves). Given the US consumes around 1.2 billion tons a year, that’s a couple of centuries of coal use, at least.

We have the largest coal reserves in the world, and those reserves will last at least 200 years (probably much longer), yet Obama has publicly stated he wants to “bankrupt” anyone who deigns to utilize this plentiful domestic resource.   Think about that.  Glover next discusses natural gas which, when combined with its cousin, methane hydrates, is likely America’s most abundant energy resource:

In 2009 the CRS upped its 2006 estimate of America’s enormous natural gas deposits by 25 percent to around 2,047 trillion cubic feet, a conservative figure given the expanding shale gas revolution. At current rates of use that’s enough for around 100 years. Then there is still the, as yet largely publicly untold, story of methane hydrates to consider, a resource which the CRS reports alludes to as “immense…possibly exceeding the combined energy content of all other known fossil fuels.” According to the Inhofe’s EPW, “For perspective, if just 3 percent of this resource can be commercialized … at current rates of consumption, that level of supply would be enough to provide America’s natural gas for more than 400 years.”

We often hear from our friends on the left that America’s energy future is tied to “green energy”.  This is as delusional as it is suicidal.  There are no green energy “magic bullets” available now, nor will there be in the foreseeable future.  They’re simply not economic.  They only exist for two reasons.  First, Obama is purposely following policies designed to make green energy appear economic by causing the price of its competition, conventional energy, to “necessarily skyrocket“. Obama’s hope is that consumers will choose expensive green energy instead of artificially expensive conventional energy.

He’s wrong, of course, because the real choice consumers will face is one between expensive green energy that doesn’t work and artificially expensive conventional energy that does.  This is not a difficult choice.  Consumers will simply spend more money on energy than is necessary, and less on everything else.  Not exactly a recipe for economic growth.

The second reason inefficient green energy exists is because Obama is lavishing billions of dollars in taxpayer funds (at a time we can ill-afford such waste) on his corporate cronies.  GE’s Jeffrey Immelt, for example, is receiving copious subsidies to build wind turbines and related infrastructure that would never be built absent said subsidies.  And let’s not forget the Chevy Volt. (Incidentally, where do proponents of electric cars think electricity comes from?  Do they think it’s created magically within walls and, to access it, one simply has to slap an outlet on the wall? If not, how do they think we can drive electric cars if they’re against building the coal and nuclear powered plants necessary to generate the electricity to charge them? Note to liberals: Batteries don’t produce energy, they store it.)

If these subsidies didn’t exist, and the Obama Administration stopped following policies designed to make conventional energy prices necessarily skyrocket, we wouldn’t even be talking about green energy.  We don’t need it (see above), it’s not economic and, more importantly, it doesn’t work very well. Certainly not as well as conventional energy.  Moreover, as Governor Palin recently noted, so inefficient is green energy that for every new “green job” created, four are lost in the overall economy.  I’m not a mathematician, but that would appear to be a poor tradeoff, and with a real unemployment rate in excess of 16%, just plain stupid.  And we can no longer afford to be stupid.

The good news is that we don’t have to be.  We have more conventional energy resources than every other country in the world.  With the recent tsunami disaster in Japan being exploited to put nuclear energy on hold for another generation at least, we need to be developing the proven energy resources with which this nation is so richly endowed. Unfortunately, to do this, we need a president whose goal is to make reliable energy more — not less — available, and one whose energy policy is designed to make energy more — not less — affordable. Sadly, the current occupant of the White House takes the opposite approach.  To quote Governor Palin, “2012 can’t come soon enough”.