Andy Barr offered us another fine example of excellence in journalism during his coverage of the Rolling Thunder event on Sunday, in Washington DC. He writes in the first paragraph (emphasis):

Only one advance staffer was on hand to wrangle the fans and reporters hoping to get close to the former vice presidential nominee, who arrived at Sunday’s Rolling Thunder rally on a motorcycle driven by her daughter Willow.

Willow Palin is 16 years old. The woman who drove Governor Palin to the Vietnam Veterans Memorial looks young, but she certainly looks old enough to vote.

I actually know the name of the woman driving and it isn’t “Willow Palin.” She lives in my city where she does NOT attend High School, but in fact, owns a small business. I’m not going to publish her name here however, due to the fact that she has not released it through any media agency or otherwise in connection with the Rolling Thunder event.

That said, the best part of the Andy Barr piece is that he already posted a correction about who was driving the motorcycle. At the end of the article, he wrote (emphasis):

CORRECTION: An earlier version of this story mistakenly indicated that Sarah Palin was driving a motorcycle when she arrived. Willow Palin was.

He really got this obvious, yet basic fact wrong TWICE! 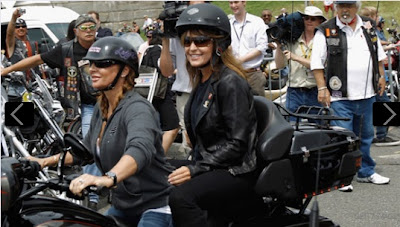 A San Diegan who is not Willow Palin and Governor Palin riding to the Vietnam Veterans Memorial during Rolling Thunder event in Washington DC, 2011.

I’m not going to launch into some tirade by insinuating some sort of bias on Andy Barr’s part here. Clearly it wasn’t Andy’s, nor his editors political leanings at work here. This is actually the same problem I alluded to the other day when I wrote the piece about ABC’s horrendous reporting. This is pure laziness and sloppiness on the part of Barr and his editors.

It’s bad enough that we as Americans have to deal with the constant diet of bias from the leftist media mills. But when they can’t even get the basic who, what, where, when, why, and how of a story correct, it makes you wonder why they exist at all. We’re accustomed to reading news and filtering out the bias, just to grab on to a fact or two. As it turns out, that might not be a good idea either.