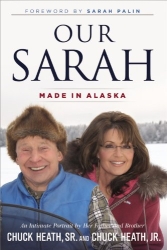 I was fortunate to receive two advance copies of Our Sarah: Made in Alaska, one from a colleague and the other from the publisher’s publicity agent. If Going Rogue was the Bachelor’s level course on the study of all things Palin, Our Sarah is the Master’s Degree. Veteran Palin supporters will learn intimate details about the life and times of the Heath family that shaped who former Alaska Governor Sarah Palin is today. It is mandatory reading in developing a complete understanding of one of America’s most fascinating families, members of whom I’ve had the pleasure of meeting at various rallies and events over these past four years.

Six core themes underpin Our Sarah: family history and background, the beauty and danger of Alaska, work ethic, sports, faith, and Gov. Palin’s political career as experienced by her father and brother. The 282-page book is divided into 22 chapters that alternate in perspective between her father Chuck Heath, Sr. and her brother, Chuck Heath, Jr.

Our Sarah is pleasant and easy reading. As the chapters unfold, the Heaths intertwine details of immediate and extended family, friends, and strangers – ordinary people and celebrities alike – they’ve met along the way in anecdotes that will keep you on the edge of your seat. This is a book that will draw you in and you will not be able to put it down for too long, if at all. It will re-kindle a bygone era when we actually sat in an easy chair to read a book for pleasure – for hours on end.

Gov. Palin’s lineage on both the maternal and paternal sides of her family dates back to four people who were on the Mayflower. Chuck Heath Sr. and Jr. go back as far as the Gowers and the Brandts in their extensive treatment of family history. Chuck Sr. describes his relationship with his father Charles, the painful events that drove them apart for years and their final reunion. Veteran Palin supporters know that Charles Heath was a sports photographer who plied his trade in North Hollywood, California, but Our Sarah provides intimate details of that era heretofore not known to the public.

When I saw the name of the North Hollywood street the Heath house was located, I felt compelled to look it up on Google Maps. The street is less than a mile northeast of Irvine Ave. where my uncle took me to visit his mother when I was an 11-year-old boy. On that trip, I saw the beauty of these United States out the window of my train and it forever instilled in me a sense of my own Manifest Destiny. As I read later, Chuck Sr. loved to read books by Laura Ingalls Wilder, on which the TV series Little House on the Prairie was based. I sat in shock for a few minutes – I too grew up on Ingalls’ books – borrowed from the Queens Public Library – the same feelings they invoked in Chuck Sr., they had invoked in me.

My vicarious personal connections aside, Chuck Sr. details life in North Hollywood with his father, followed by their move to the outskirts of Sandpoint, Idaho; his meeting and ultimately marrying Sally Sheeran; and their moves to Skagway, Eagle River, and Wasilla, Alaska.

Alaska is an incredibly beautiful, but dangerous and unforgiving place. The penalty for one careless moment is generally death or severe injury. Alaska still is the Final Frontier and those who live there face ever-present dangers from wildlife attacks, avalanche, blunt trauma, drowning and hypothermia. The Heaths recounted close call experiences that could have resulted in their premature demise and accidents that have killed and maimed dear friends. The Heaths explained how Alaska shaped them and Gov. Palin and also described the ironic sense of humor indigenous to Alaskans.

The Heaths were not well-to-do and had to work hard for everything they had. All their success, whether in athletics, academics, politics, or any other pursuit came about through committed, dedicated hard work and tenacity. No job was beneath any member of the family. Children were expected to work and learn the value of work at an early age. Nothing was handed to them. They had to work to pay for their college educations, as well as any luxuries they desired. The Heaths described how Gov. Palin worked in the commercial fishing business, including the day she continued to gill net thousands of pounds of salmon with three freshly broken fingers. This legacy helped propel Gov. Palin to where she is today and will propel her even higher where ever her future leads. In the many anecdotes and vignettes that the Heaths share, their work ethic and how they adapted, improvised, and overcame is a consistent and recurring theme.

Sports was and is a major part of the Heath and Palin legacies. Chuck, Jr. started with baseball and became a football and hockey player. He took up bicycle racing, but that sport was not suited to his build and a serious biking injury ended that pursuit. The girls all played basketball and Palin supporters should already be familiar with Gov. Palin’s history in high school basketball having won a game on a broken ankle. Running defined the lives of both Chuck, Sr., and Gov. Palin. Chuck, Sr. ran in the Boston Marathon; Gov. Palin has run marathons privately and ran a half-marathon the day after her Indianola speech.

The Heaths described their various religious backgrounds and journeys that have shaped their lives and that of Gov. Palin. Church of Christ, Scientist, the Roman Catholic Church, Assembly of God, the Presbyterian Church, and simple individual, private worship have all defined the lives of the Heaths and Palins throughout their history. Some of the extended family are Mormons. Chuck Sr., delineated in detail the religious journeys that he and other family members took.

The Heaths provided a solid synopsis of Gov. Palin’s political career as they experienced it from her run for Wasilla’s City Council up to the time she stepped down from the governorship and why she made that decision, which they only learned of at her public announcement. They expressed their bitterness at how she was treated since being nominated as John McCain’s running mate, and how they came to terms with it. When Gov. Palin was nominated, the Heaths were naive as to how her enemies would try to destroy her, but learned soon enough. Gov. Palin’s future remains unknown, but the Heaths believe whatever path she takes will be exciting. Veteran Palin supporters will find the passages on her political career to be a good refresher course. Newer supporters should read Going Rogue first, then Our Sarah.

Going Rogue of course is Gov. Palin’s memoir and thus tells her life’s history as she lived it. America By Heart delineates her political, religious, and ethical thought processes. Bristol Palin’s Not Afraid of Life is Bristol’s memoir, but provides some perspective on Palin/Heath family life as experienced by the Palins’ eldest daughter.

Our Sarah rounds out the library by providing a complete family history through five generations and an intimate portrait of Gov. Palin’s life as seen through the eyes of her father and brother. Those who do not understand the family’s ties to various states, or other family details will learn them in Our Sarah. Having supported Gov. Palin for over four years, two of which were required to compile her life’s accomplishments, I am fairly knowledgeable about her, as well as her family and friends. But, no supporter has the intimate knowledge her father and brother have. They are the ultimate insiders after all. The Heaths know Gov. Palin’s daily routine, and they share it in Our Sarah.

Our Sarah is available in hardcover and as an audio book. Our Sarah is published by Center Street, a division of Hachette Book Group, Inc. It is to be released on September 25. The Heaths are conducting a book tour and media roll-out. The book tour currently consists of stops in eight cities, starting in Rochester, NY on September 29. Locations in Washington state, Idaho, and Ohio are being worked out.