From Wasilla to Texas: Heaths Reunite with Old Friends

Via Facebook: Chuck Heath fills us in on the day’s Our Sarah book tour happenings:

I said I’d post this yesterday. This is a photo taken at our Dallas signing yesterday. We had a mini-reunion, here. The guys behind us, Dane and Shane Tharp, and John Cottle, all went to high school with me and Sarah in Wasilla. Dad coached Dane and Shane, and John and I played together on the basketball team. They all live in Texas now, and we’re really grateful they went out of their way to come see us. 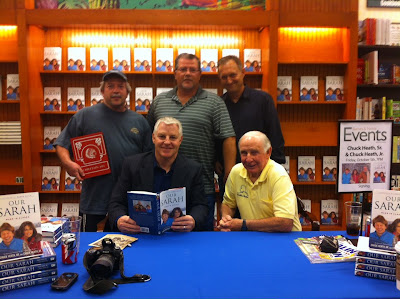 Here’s what he posted after arriving in Indianapolis:

We just arrived in Indianapolis and this town is hopping. Big Packers/Colts game tomorrow, and we’re going! We hear music blasting outside of our hotel window as various groups of fans, mostly Cheeseheads, seem to be getting themselves juiced up for tomorrow. We’ve already met some of them, and I’ll tell you what… they sure are friendly.

We’re Packer fans because of dad’s connection to former all-pro Green Bay player, Jerry Kremer. Jerry used to block for dad when they played high school ball together in Idaho. Jerry contributed to our book, too.

We are going out for a quick bite to eat, and then we’ll try to get to bed fairly early for once. I hope dad has an extra set of earplugs.

We will be on FOX news tomorrow at 12:30est., and we just got the word that some new national stuff is being lined up.

If any of you in Indy would like us to sign your books, we’ll meet you in front of the Colt’s Pro Shop by the south entrance of Lucas Stadium, right after the game. I doubt any of you will bother carrying a book into the game though!