The following is a guest submission by Ron Devito 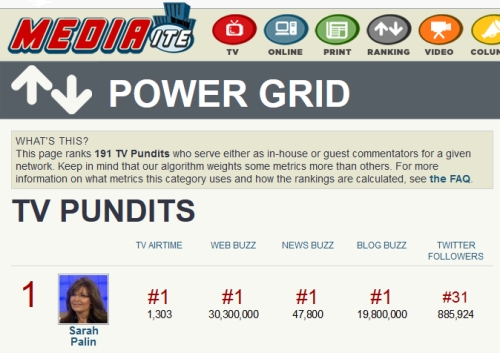 Former Alaska Governor Sarah Palin is currently ranked as the top TV Pundit on Mediate’s Power Grid, a tool which ranks the influence of TV Commentators, of whom 191 are currently in the list. Gov. Palin’s ranking at the top of the stack means the algorithms the tool uses to measure influence have calculated her as having the highest influence.

Reviewing the rankings in the graphic, Gov. Palin has had 1,303 appearances or mentions on TV in some for other during the past seven days as compiled by TVEyes. Gov. Palin has an astonishing 30,300,000 web searches, was mentioned in the news 47,800 times, and has been blogged about 19,800,000 times. She has 885,924 Twitter followers. Facebook is not accounted for in the Grid, however, Gov. Palin has 3,517,586 likes on her Facebook page as this story goes to press and 85,172 are talking about her Facebook Page.

Political Capital or Influence – called “referent power” in MBA-level leadership theory courses – is one of the five key bases of power. Political capital in simple terms is influence based on identification with leader, respect, and trust. Leaders with high political capital tend to have high Q Scores. Gov. Palin is listed in the Q Score database as “performer, living” – a very broad label the firm uses for all TV personalities. In a phone conversation I had with a worker at the firm, her Q Score would require a $1,400 subscription every six months to obtain. Political Capital / Influence has been Gov. Palin’s principal base of power since resigning her office on July 26, 2009.

Mediaite has not always been friendly to Gov. Palin. The fact that she is at the top of the stack in their Power Grid is hard evidence that she is not “irrelevant,” though her detractors surely wish she is.

Gov. Palin’s Klout Score is 89 and this is without her even being a member of the service. Klout is an application that measures a person’s effectiveness on social media. Once Klout Scores reach into the low 60s, the amount of influence one must reach is far higher than in the lower brackets. Some celebrities have Klout Scores in the high 50s and low 60s and this is not a difficult range for an ordinary person active on social media to reach. Klout Scores above 65 require considerable influence to attain. The 80s and higher are attainable generally only by top-tier celebrities and heads of state.