DEVITO: ACES Purpose Is To Give AK Fair Value For Oil Pumped And Encourage Investment 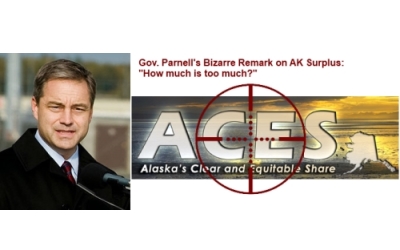 Alaska’s Clear and Equitable Share “(ACES) was intended to ensure Alaska got a fair value for oil pumped from its lands, while at the same time encouraging more investment in the oil fields,” Pat Forgey, Alaska Dispatch reported yesterday in Fact check: What was the purpose of ACES oil tax?.

In a truly bizarre case of “politics doth make strange bedfellows” Alaska State Senator Hollis French D-Anchorage – one of former Alaska Governor Sarah Palin’s most bitter enemies once Obama became the Democratic Party’s nominee in 2008 – was and remains a staunch defender of ACES. French launched his unsuccessful assault on Gov. Palin’s career as one of the principals in the “Troopergate” – or more rather “Tasergate” investigation – at the height of the McCain-Palin 2008 campaign. French is a hard leftist and strong circumstantial evidence suggests the Obama campaign was behind the investigation. French, therefore is neither a friend of Gov. Palin’s nor of conservative principles, but ironically, he is one of the few in the stacked legislature who are standing up for ACES.

Under ACES, which was passed with solid bi-partisan support, the tax levied on production profits increases as oil prices increase, but oil companies are given tax credits for exploring and and drilling new fields. Smaller companies have been more aggressive about exploration, thus have benefited from the capital expenditures breaks offered under ACES. The tax system came under attack as the ink was drying on Gov. Palin’s signature and her successor – Alaska Governor Sean Parnell – who first promised to uphold it, has waged a three-year-long war against it.

Though oil production has declined, employment on the North Slope has increased steadily since the passage of ACES. Forgey reported on the whole back-and-forth among those who claim that ACES is responsible for the decline in production on the Slope. But, “The companies that operate on North Slope say the aging oil reserves have been undergoing “normal field decline,” most of which happened before ACES was adopted in 2007,” Forgey reported. Production has been declining steadily since the 1980s, long before ACES. Gov. Palin was a college student at the time production began to wane.

ACES was not designed to raise taxes, punish companies, or increase production. Forgey reported on a controversy involving Gaffney, Cline & Associates, an oil industry consultant the state retained when crafting ACES. Proponents of SB-21 – the bill that would abolish ACES – say the firm claimed ACES would increase production, but no evidence exists to support the claim. The Parnell administration has the firm under contract, but not for matters related to oil profits taxation. Forgey reported that the Parnell administration refused to respond to requests from State Sen. Gara filed under Alaska’s public records law for the firm’s economic models and reports. Further, the administration will not make a decision on releasing the data until after the legislative session concludes. These moves suggests the Parnell administration knows the firm never made promises that ACES would increase production – which was not the point of the tax system in the first place.

Alaska Senate Bill 21 has been re-written to reduce the oil tax base rate from 35% to 33%, the Alaska Dispatch reported on April 4. The changes could cost the state an additional $1 billion over the next six years, according to the State’s Department of Revenue, in Pat Forgey’s report filed on April 6. The bill is estimated to cost the state between $5.7 billion and $6 billion over the next six years. Ordinary Alaskans have been protesting SB-21 as well.

One of the bill’s chief proponents “House Resources Committee Co-chair Eric Feige, R-Chickaloon, said that if Alaska took $1 billion less in taxes from oil companies, that money would all be reinvested in Alaska,” Forgey reported.

But, “the tax cut is to oil companies’ profits, they’ll have to pay income tax on that money. The federal corporate income tax rate is 35 percent, though companies had varying effective tax rates. Therefore, a billion dollar tax cut would leave companies with only $650 million available to be invested in Alaska, in theory, if they choose to do so.”

The entire point of Alaska’s Clear and Equitable Share (ACES) – one of Gov. Palin’s three core accomplishments while in office – is to give oil companies the opportunity to buy down their tax burden by reinvesting in Alaska.

Meanwhile, Forgey reported on April 6 that the House in the dark of night passed an Amendment to SB-21 that requires state auditors checking companies’ tax returns to use oil industry figures and not their own. “The amendment was proposed by Rep. Mike Hawker, R-Anchorage. His wife is a business and financial analyst for ConocoPhillips, the state’s largest oil producer. According to Hawker’s financial disclosure filings, she earned between $100,000 and $200,000 from her ConocoPhillips job last year,” Forgey reported.

The language of this amendment was in the Petroleum Profits Tax (PPT) of 2006. Out of the PPT was born the Corrupt Bastards Club (CBC) and the VECO scandal. It appears Alaska Governor Sean Parnell along with his henchmen and women in both houses are gearing up to launch CBC 2.0.

Another Dispatch article filed on April 4 by Laurel Andrews delineated in detail how Alaska’s laws foster conflicts of interest in the legislature. Legislators cannot simply recuse themselves from a vote. The Uniform Rules require unanimous consent from the requestor’s colleagues, however, a legislator is free to abstain from voting altogether absent a request to recuse.

Alaskans are awake to what is going on with SB-21 and have protest in at least two cities. Some have organized under the banner of “AKBackbone,” which is comprised of Republicans, Democrats, and Independents.

AK Backbone has been conducting rallies and protests throughout the state and the Dispatch provided photos from Anchorage, all courtesy of Clark James Mishner. 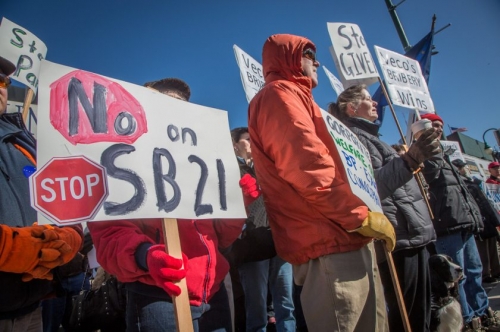 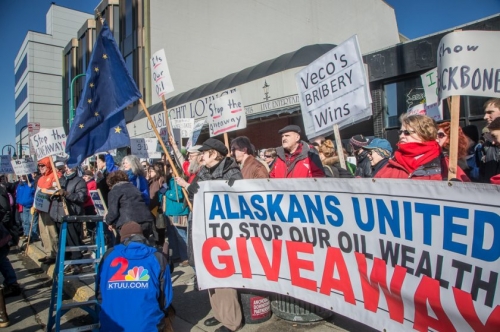 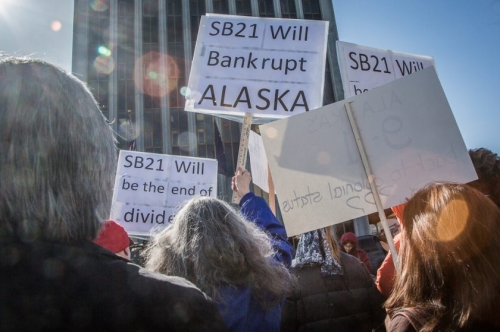 These photos in which protesters burn a symbolic $5.5 billion check in Homer are courtesy of Bob Shavelson. 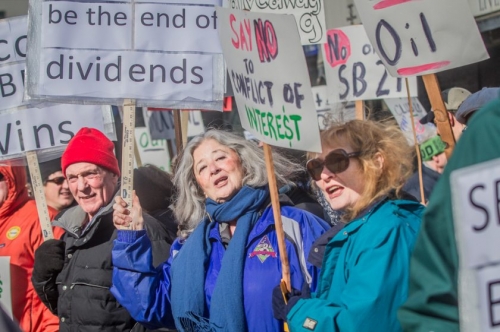 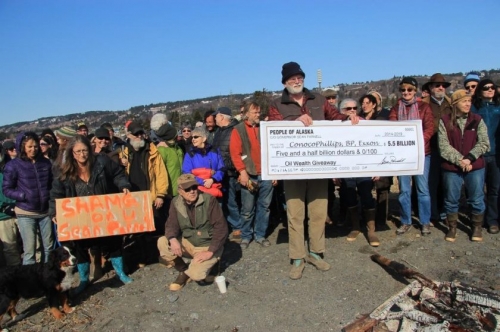 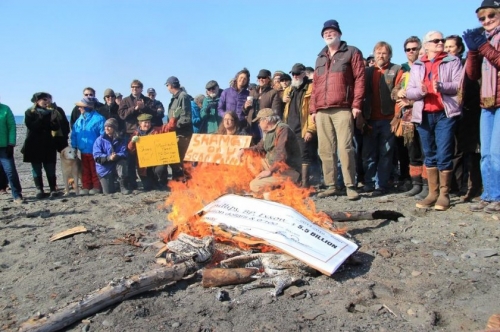 THOMAS is an Editor at Conservatives4Palin, and Chairman of the Board for American Grizzlies United. Mr. Schmitz is a Southern California native based in Hollywood. Thomas‚Äô controversial pop culture approach to modern politics delights supporters and offends critics. Mr. Schmitz has been described as, ‚Äúculturally rebellious‚Äù, and a ‚Äúrebel with a cause‚Äù.